Follow this advice for writing a basic paragraph response to a given topic. For advice on writing paragraphs within a longer essay, see the Essay Writing section of the Writing and Research Skills Workshop.

Back to the Workshop

The Structure of a Paragraph

Paragraphs are made up of 4 basic parts that help you explain your ideas clearly when responding to writing topics:
While some people devote separate sentences to each part, it is also okay to combine some parts into the same sentence. Many writers will mention their main points in their topic sentences, and it is easy to combine main points, supporting evidence and analysis in the same sentence.

An example of how to put everything together:

Let’s say you have been given this writing topic: Explain how Renaissance art differed from medieval art.

If you are still learning how to write a good paragraph or if you have a lot of time to complete the assignment, it is a good idea to outline your ideas first to figure out what you want to say and how you are going to say it. 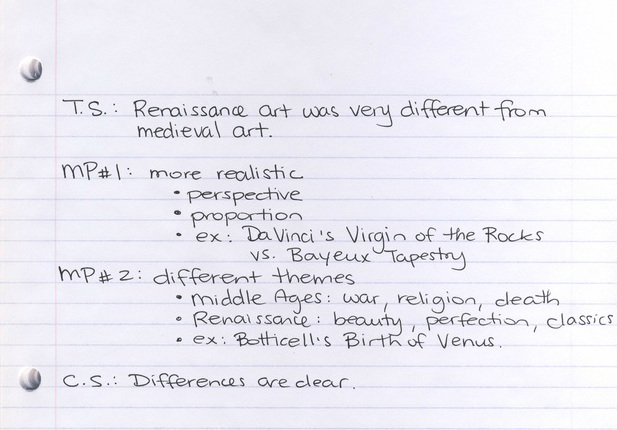 Renaissance art was very different from medieval art because it was more realistic and it focussed on different themes. Medieval artwork, like the Bayeux tapestry, looks flat with figures that are not to scale. Renaissance artists developed new techniques, such as perspective and proportion, that helped make their work look more realistic. Leonardo da Vinci used these techniques when painting the Virgin of the Rocks, a painting where the human figures have realistic proportions. He used perspective to give his painting depth by making the figures in the foreground much larger than objects on the horizon. While art in the Middle Ages focussed on themes of war, religion and death, Renaissance art was more optimistic. Renaissance artists still created works with religious themes, but they also focussed on classical themes, beauty and human perfection. Botticelli’s Birth of Venus is an excellent example of a painting where these three themes are present. The differences between Renaissance art and medieval art would be immediately clear to anyone who compared pieces from each era.
Remembering all the parts of the paragraph and how to put them together can be hard.
Try using the acronym SEEAC to help you.
Learn more about SEEAC paragraphs here.